Madelynn - A story of love, loss and never enough time

When my husband Joe and I got married, we started trying right away to get pregnant. My daughter Jenna was 16 at the time and planning to leave for college in less than 2 years. If we had a baby right away, we could spend time with the new baby as a family. So we started trying.. tracking ovulation, taking temperatures, standing on my head- whatever we thought might work. After trying for awhile, we both realized something wasn’t right and decided to seek help from a specialist. We went to the amazing doctors at South Jersey Fertility Center, and after months of testing and procedures, we finally had our diagnosis. They said we had unexplained secondary infertility, a diagnosis that really isn’t a diagnosis. It basically means the doctors can’t find anything wrong with either one of us, except we just can’t seem to get pregnant on our own. The specialist informed us that were perfect candidates for IUI (intrauterine insemination), so we tried that first. 3 rounds of IUI later and still no pregnancy.

We then moved on to IVF (in-vitro fertilization). On our first round of IVF, we opted for a fresh transfer. We had 2 good embryos and transferred both, but neither one took. That was a huge disappointment because we really though that it was going to work. We decided to take a break, getting another consult with the doctor. They decided at that time we change our protocol. This led to an egg retrieval in February where we got one perfect blastocyst, our 3AB, which we froze. We transferred that perfect little blastocyst on April 8, 2019.

On April 13, 2019 we got the news we had been waiting for; we were finally pregnant!

At 5 weeks 6 days, I had an ultrasound saw our little bean and her strong heartbeat. It was at that time I knew we were going to be okay. Fast forward to July, we found out our little bundle of joy was a girl. I was ecstatic! Her daddy was kind of hoping for a boy, but was just happy to have a healthy baby. All of her ultrasound scans were perfect. However, I was diagnosed with gestational diabetes at 29 weeks pregnant. This meant changing my diet to try controlling my blood sugar levels. I was able to control my meal time levels, but my fasting blood sugars we never good. Fasting blood sugars are controlled by hormones that the placenta releases, and I couldn’t get my hormones to cooperate. After 5 weeks of uncontrolled sugars, I was started on insulin. Finally, at my 38 week appointment, the maternal fetal specialist said it would be safer to get Madelynn out than for me to remain pregnant. My c-section was scheduled for 2 days later. 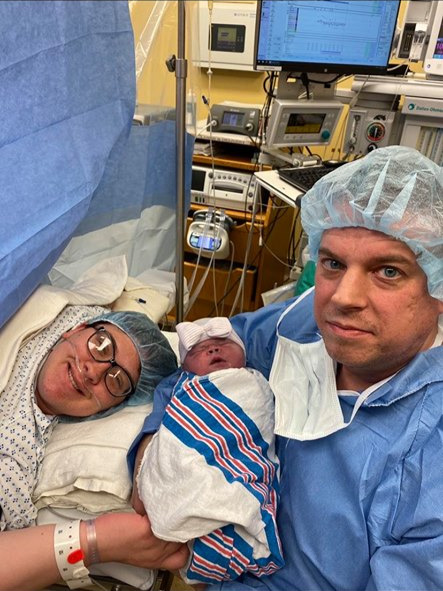 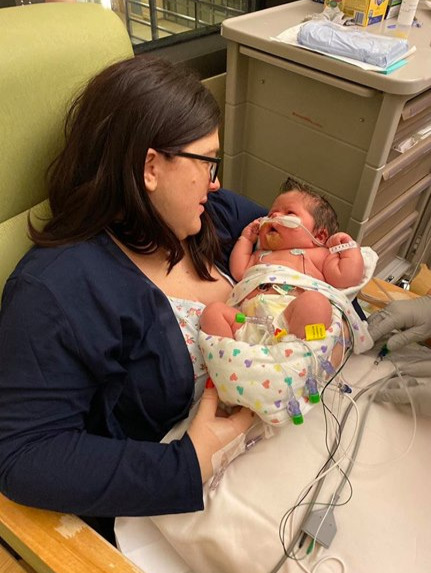 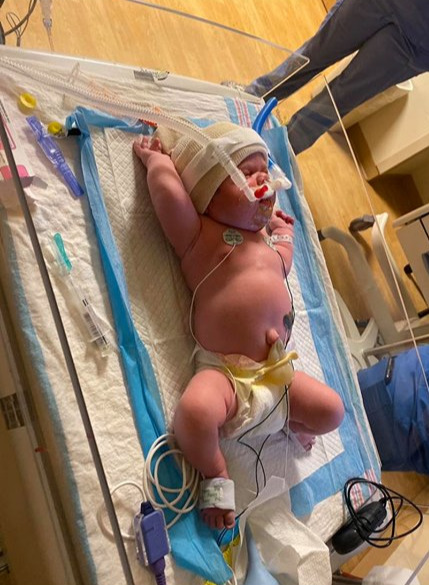 On Friday, December 13, 2019, our sweet Madelynn was born via c-section at 7:57 am weighing 9 lbs 8 oz and measuring 21 ½ inches. As soon as she was born, she started having trouble breathing. The Neonatologist told us that she wasn’t crying enough and that she swallowed some fluid on the way out. They cleaned her up and brought her over for me to see for a moment. Shortly after, she and her daddy went to the NICU while they finished up my surgery. I was a nervous wreck and so was her daddy, but he was so strong for both of us. He stayed with her and asked questions so he could come give me updates. Finally, they brought me up to the NICU to see her.

There she was, my little rhino, with the CPAP machine helping her breathe. She was so perfect with her fat thighs and full head of dark hair. They told us she was going to be okay and promised she would be home by Christmas. Her daddy and I spent the next 3 days back and forth between my room and hers. I was pumping and she was getting my milk through an NG tube at first, and then through a bottle. Finally, on Sunday, I was allowed to breastfeed her. It was such a magical moment something I had been waiting for since Friday. Sunday night they told us that unless something huge happened overnight, she could come home Monday. We were shocked- they had literally just taken her off oxygen and pulled her IV, but we were thrilled nonetheless. It was so exciting that we wouldn't have to go home without our girl. Monday morning came and they told us she checked out perfect! We had the photographer come in and take her hospital pictures before saying goodbye. We put our baby girl in her perfect car seat, with pink polka dots, and we brought her home.

At home, her big sister Jenna finally got to hold her for the first time. Her cousins, who were desperately waiting for their turn to meet her, came over and held her, as did my parents and sisters. We even took pictures in front of the Christmas tree! That evening, I sat on the couch nursing Madelynn while making up our Christmas cards online. I wanted to mail them before Christmas. Her daddy and I just spent some time with her, and then it was bed time. We were up with her a few times that night, her daddy jumping right up to soothe her the minute she cried. He gave her a bottle and put her back to sleep. Finally, around 4:30 am, she woke up again and I told him to just let me have her. I would nurse her back to sleep. She nursed for about 10 minutes and then unlatched so I laid her face up on the infant pillow next to me with her body across mine and I dozed off.

When I woke up, I just knew something was wrong. Call it mothers instinct, maybe nurses instinct, I don’t know. I just knew she wasn’t okay. I moved her onto the bed and kneeled next to her, unzipping her fleece swaddle so I could see her chest. She wasn’t breathing. I immediately did CPR and screamed at my husband to call 911. The paramedics came and took her to the hospital, but she was already gone. They did everything they could do, both in the ambulance and in the emergency room, but Madelynn was already with Jesus. Less than 14 hours after being discharged from the NICU, she was gone.

We spent hours with her in the emergency room, holding her and saying goodbye. I asked the nurse to call a photographer, and that’s where Three Little Birds came in. Desiree willingly walked into the hardest day of my life and took the most beautiful photographs of our baby girl and our family holding her. They are gut-wrenchingly sad, yet so important because for many of our family members, they are the only pictures we have of them holding her. We took hand prints and foot prints, spending as long as we could loving her, before they had to take her. I knew that would be the last time I would ever hold her, and I wanted to hold her for as long as I could. When it was time to say goodbye, I hugged her tight, wrapped her in her blanket and handed her to my friend who was going to walk her out to the medical examiners van. Saying goodbye to Madelynn was the hardest thing I have ever had to do in my entire life. There is no pain in this world like having your child ripped from your arms; and I honestly feel like it’s worse because I worked so hard to conceive her. She was wanted, planned for, and loved more than any words could ever explain.

We will never know why Madelynn was taken from us--not until we meet God ourselves anyway, and that weighs heavily on us often. I have always been a religious person, strong in my faith and trust in God. But when Madelynn died, I was angry at God. How could he do this to us? How could he take our baby from us? We don’t deserve this. We are good people, good parents, good Christian’s. Why did this happen to us? We’re never going to know the answer to those questions, at least not while we are on this Earth, but with time, the pain has eased. I know that God didn’t take my baby, I know that God wept with me, I know my pain hurt him. I know that God is good, even when life isn’t fair. And that’s the thing--life isn’t fair. There is no rhyme or reason as to why bad things happen to good people, they just do. What matters is how you handle those bad things. How you continue on with your life. We have chosen to move forward with our lives, with Madelynn right by our side. We collect books in her honor and donate them to local hospitals, NICU’s and charities. We are participating in the TEARS Foundation "Rock and Walk" in October to raise funds for them in Madelynn’s honor. It’s only been 6 months since she went to be with Jesus, yet it feels like yesterday and a lifetime ago, all at the same time.

No amount of time with her would have been enough, but we are incredibly thankful for the 4 days we did get with her.

A Letter from a Grief Strickened Heart